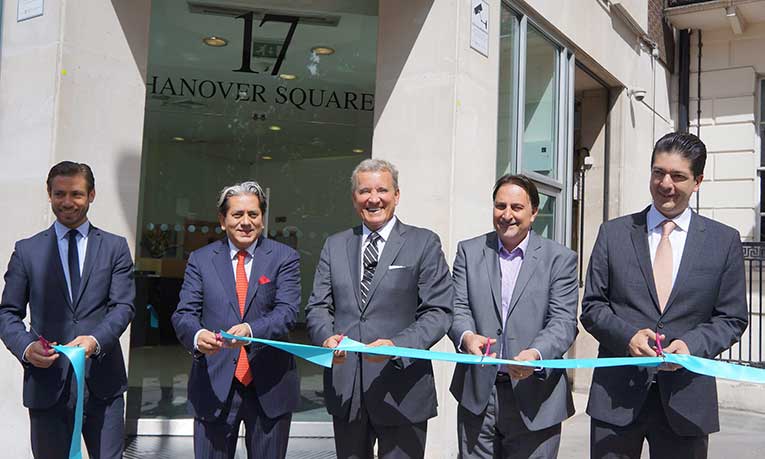 London, United Kingdom.- The Secretary for Economic Development, Carlo Bonfante opened the representative office of the state that will drive the continued arrival of new investments and export of products.
To strengthen the position of Baja California as a business platform for European companies in America, The Secretary of Economic Development, Carlo Bonfante Olache representing Governor Francisco “Kiko” Vega de Lamadrid along with The Minister David Najera, Deputy Head of Mission of The Embassy of Mexico in London, inaugurated the representative office of the state that will drive the continued arrival of new investments and the export of products.
During the ceremony, the Secretary highlighted the commercial ties between Mexico and the UK, emphasizing the vision of trade liberalization and the use of international relations that have characterized Baja California.
He thanked Daniel King, Head of High Growth & Emerging Markets division of the UK Trade & Investment office, for their support to this initiative and the collaboration that has allowed trade missions in the state.
Among the attendees,  were present the Regional Director for Europe, Middle East and Africa ProMéxico, Carlos Pavon and Mario Alberto Sanchez Gonzalez Alvarez, Director in the UK ProMéxico, who were referred as important allies with extensive experience and a strong network of relationships that will contribute the success of the performance.
Later, as part of the activities for retention of companies, Bonfante Olache met with Hugo Mauerstad, President of Navico Company, which has operations in Ensenada where electronic components are manufactured and used in navigation, where the goal was to reiterate the importance of the continuation and growth of the operations in Baja California and to introduce incentives to consolidate new projects.
During the meeting with the Ambassador of Mexico in UK, Diego Gomez Pickering, the Head of the SEDECO reiterated the interest of making the most of the Dual Year of the United Kingdom-Mexico 2015 and to project the state, he also thanked the collaboration that has had with the Embassy. For his part, the Ambassador said the opening of an office in Baja California contributes to the projection of Mexico as an attractive destination for European investors based on their international competitiveness.
The Secretary emphasized the presence of British companies like Smurffit Kappa, Esterline, Carl Zeiss, Reckitt Benckiser, Navico, Smiths Medical, Gameloft, Essilor, Dialight, Bosch, Techicolor, Tetra Pak, Hutchinson, GKN, Schneider and Zodiac Aerospace.
Source: Siglo 21 Periódico Industrial

next7 of the 10 Aerospace Leading firms are operating in Mexico